​Participating in the contest Performance Architecture, which sought to select five urban interventions to be implemented in the city of Guimarães to celebrate its status as European Capital of Culture, Portuguese studio Like Architects and fashion designer Ricardo Dourado proposed to turn the city’s public fountains into pools.

Their idea became a reality when they were chosen among the winners, and the Portuguese city has seen its fountains turn into colourful and lively hangout spaces with loungers, stripy parasols, plastic tables and chairs, inflatable rings and colourful plastic balls.

For more info check out this article!​ 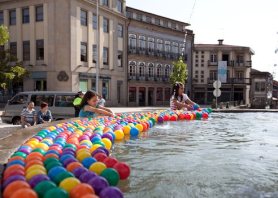 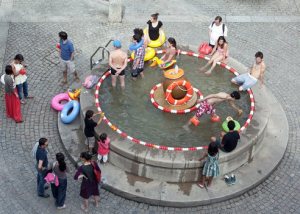