Part meetup, part popup bar, part talk series: all fun! Idea Bombing Sydney was launched on Wednesday night in an underground car park in Kings Cross. Armed with a blank canvas and chalk, the event asked people ‘how can we make Sydney more creative?’. There’s so much happening in Sydney at the moment and Idea Bombing was one way of connecting creative people and promoting ways of closing the idea loop, by introducing the Awesome Foundation and the City of Sydney Matching Grants program.

​Read more >> here ​<< a great recap of the night by our friends at Wildwon.

Interested in starting an Idea Bombing chapter in your city? Email John at [email protected] 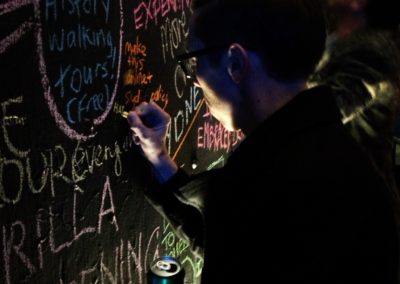