A unique suburb in Amsterdam, Ijberg, sees residents floating and living on water. The ambitious housing project forms part of a plan for Holland’s future in combating climate change and rising sea levels. Architect Koen Olthius now has further plans to move development away from pricey individual homes to higher density dwellings, and even floating parks, transport facilities and energy fields for the Netherlands, a nation with one quarter of its land mass currently below sea level.  There are also talks of other low-lying nations like the Maldives getting a floating makeover, and even flood-prone areas in places like Britain are considering a future afloat.

More images of Ijberg at inhabitat 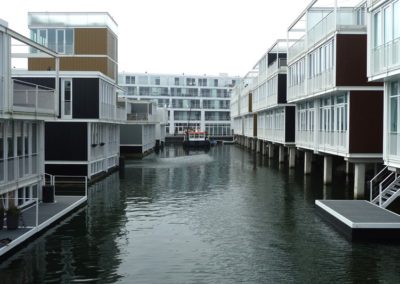