Australia’s first glow in the dark path has been installed in Gosford. A layer of minerals covers the path and absorbs ultra violet light to emit a soft glow at night.

For many potential cyclists there are just often too many obstacles that prevent them from jumping on their bikes. Safety in our car dominated cities is one major concern for these cyclists. In more recent years we have seen cycle lanes developed in many major cities that separate cyclists from cars, however for many cyclists riding at night is still a major concern due to low visibility.

Similar to the project in Gosford, in Lidzbark Warminski, Poland, The TPA Society for Quality Assurance and Innovation has developed a system that is glow in the dark paint that glows for up to ten hours after the sun how gone down.

In the Netherlands illuminated cycle paths have also become a trend, however unlike the previous two systems these paths rely on a series of LEDs powered by the grid, making it slightly less sustainable and in the long run, less affordable.

From Australia to Poland and Amsterdam illuminated cycle paths appear to have become a trend, the question is will these simple innovations become standard in all our cities?

Image courtesy of Transport for NSW and boredpanda 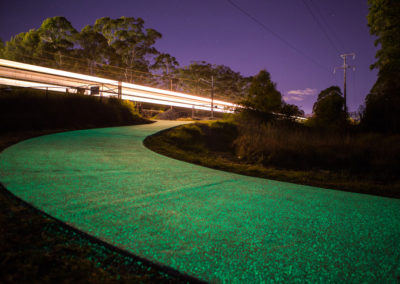