Around the world, art in transport nodes is not new! We love seeing crazy awesome art, old and new, in train stations, bus stops, taxis, airport terminals and many other spaces of transport.

However, in Australia, many transport interchanges need a dramatic and well overdue redesign. One great example is the inner circle CBD train stations of Sydney. At times overcrowded and overcapacity, design is often overlooked in favour of just keeping up with customer demand.

That’s why it’s so great to see the ‘Conductors Project’ install by Tim Andrew at Museum and St James Stations. While small in scale, it has a dramatic effect on the space and improves the daily (and often monotonous) experience for commuters. More pictures here.

Image courtesy of Tim Andrew and spotted by Art Pharmacy. 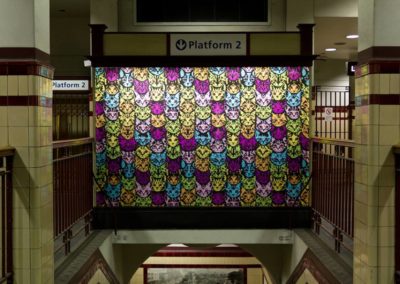